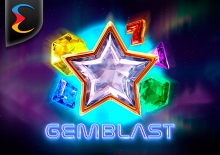 star star star star star 5/5 (999)
The legends say that the Aurora Borealis used to be trapped inside rocks. But one day, a supernatural power released some of the majestic colors into the sky. Not all was released, as some remain tucked into the crevices as gems, waiting to be discovered. Now these special gems are featured in the newest Endorphina’s slot – Gem Blast!Let your players enjoy the beauty of a "frozen flame,” as it catches the light and reflects an awe-inspiring rangeof colours. Each gemstone contains an entire night sky all on its own and if the players are persistent enough to touch the sky, they can expect a full blast of unforgettable emotions swirling on the reels.
DEPOSIT AND REDEEM YOUR WELCOME PACKAGE GET BONUS