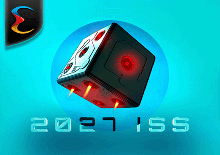 star star star star star 5/5 (961)
To infinity and beyond! Go intergalactic with this space-themed slot from Endorphina where you can explore what lies in the universe beyond Earthâ€™s atmosphere. 2027 ISS is an online video slot created to pay tribute to mankindâ€™s first venture into space which took place in 1961, and while you rocket into the stratosphere you could win cash prizes in the process.

The graphics on this slot are truly out of this world, even though theyâ€™re not particularly complex. Youâ€™ll find yourself facing a universe of stars as the black velvet night sky stretches out endlessly before your very eyes.

As the game 2027 ISS begins youâ€™ll find yourself already in the middle of the stratosphere with the crater-covered surface of an alien planet below your feet and the blue-black sky speckled with stars rolling out as far as the eye can see. But if you want to find your cash credits rocketing into space, youâ€™ll need to make your move. Just before you get started take a moment or two to prepare the reels and make sure youâ€™ve set up your betting preferences to match the budget youâ€™ll be playing with.

There are 5 reels on this slot and although theyâ€™re transparent, youâ€™ll find that there is just the standard 5x3 configuration. These reels contain 9 fixed paylines, which means you canâ€™t chose how many to activate per spin. However, although youâ€™ll be playing with the full complement of paylines every time you wonâ€™t be overwhelmed as thereâ€™s just 9 in total, which is fairly small compared to many other slots.

Try out 2027 ISS from Endorphina and you will be blown away by the coolness of this game!
DEPOSIT AND REDEEM YOUR WELCOME PACKAGE GET BONUS