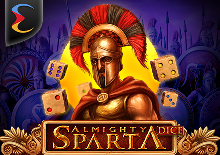 Almighty Sparta Dice is a 10-line, 5-reel, 3-row dice game, in which you will take over the role of the king Leonidas, which warriors should stand in this unequal fight against the Persian Empire led by King Xerxes.

The Oracle of Delphi has already predicted the future and the result of the battle of Thermopylae will be told by rolling the dice. Its in your power to change it, even with the outnumbered army of Greeks. Onward!
DEPOSIT AND REDEEM YOUR WELCOME PACKAGE GET BONUS