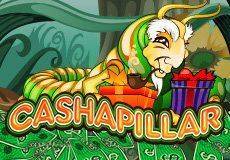 star star star star star 5/5 (866)
Cashapillar is one of the more imaginative video slot games designed by Microgaming. This is a five-reel game where the maximum wager is a whopping 1000 coins. As you see all the paylines that are possible, it is actually quite dizzying. Cashapillar features a wild and a scatter, which kicks off one of the bonus games. There is a Cashapillar symbol that acts as the most valuable in the game, and which will pay off at 1000 coins for five in an enabled payline.
DEPOSIT AND REDEEM YOUR WELCOME PACKAGE GET BONUS