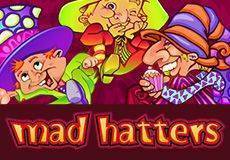 star star star star star 4/5 (631)
Mad Hatters is one of the most well-loved characters in the Alice in Wonderland franchise. He is one of the most colorful characters in the story and has captured the hearts and imagination of the viewers both young and old. This is one of the reasons why a casino slot game was made inspired by the Hatterâ€™s character. Powered by Microgaming, the casino Mad Hatters feature 5 reels giving out 30 pay lines which increase your chances of winning. At the cheapest, the game could cost you only 0.01 per spin on every line. One the other hand, you can wager as much as 75 on every spin. However, the maximum amount you can win can be an astounding 20,000 coins. As the game is inspired by the Mad Hatter, the game is pretty colorful and lively. You would be greeted by big reels that have taken up the whole screen dimension taking out any background. Purple dominates the colors in the game with the symbols all tuned into the Mad Hatterâ€™s personality. When you are all set, you just have to click â€œSpinâ€ and get the reels in motion. As with most slot games by Microgaming, the Mad Hatters slot game also gives you the chance to spin the wheels continuously for a given number of spins. Spin the reels in Mad Hatters and try your luck!
DEPOSIT AND REDEEM YOUR WELCOME PACKAGE GET BONUS