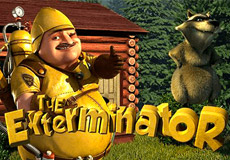 If youâ€™ve got a pest problem, noted exterminator Alvin Goodman is the person to call!

Watch his hilarious antics as he tries to control the raccoon population in and around an otherwise quiet and peaceful cabin town. But the raccoons are wily creatures who know the land and put that knowledge to their advantage, and it soon becomes a grand battle of wits and strength as Alvin does his best to complete his mission in The Exterminator

Alvin needs your help to catch the dastardly raccoon! Come along and see all the wacky hijinx for yourself when you play The Exterminator!
DEPOSIT AND REDEEM YOUR WELCOME PACKAGE GET BONUS