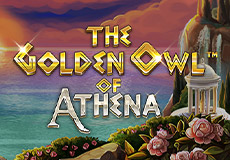 Journey to ancient Greece and unlock the secret of great reward with the Golden Owl of Athena. In this visually stunning 3Ã—5 classic slot, The Golden Owl is the key. Harnessing the wisdom of the ages, Athenaâ€™s Owl offers up to 20 Free Spins. However, as a wellspring of knowledge, the Golden Owl offers more than just Free Spins. This majestic creature also awards Scatter wins and acts as Wild for all other symbols on the reels.

The will of Athena takes over during Free Spins and anoints a single symbol at random. Should that symbol be scattered along the reels during Free Spins, the symbols will expand to fill the reel, awarding bonus wins. Follow the Golden Owl and she will lead to eternal reward in The Golden Owl of Athena.
DEPOSIT AND REDEEM YOUR WELCOME PACKAGE GET BONUS