The Mystery of Eldorado Slots (Endorphina) 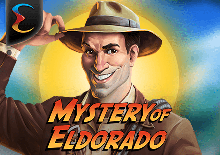 The Mystery of Eldorado Slots (Endorphina)

star star star star star 5/5 (513)
The Mystery of Eldorado is a fantastic 10-line and 5-reel online slot game inspired by the real hunt for the magical golden city which was said to be hidden deep in the lush South American rainforest. Grab your gear and get ready to scout through the forest with an adventurous hunter to find the glorious treasure. Keep your eyes peeled for danger and avoid any pitfalls that will get in your way!

Gold was the ultimate treasure that has been lusted over since the beginning of time. As soon as the rumors spread about the golden city built by the tribes of South America, many explorers and treasure hunters did all they can to try to find it for themselves. Two of the most famous expeditions were led by Sir Walter Raleigh and although he never found the city, he was convinced that the glorious city still stood in the area, waiting for someone to find it. He believed that the amount of gold in the city was unimaginable and full of wealth and beautiful treasures.

Until this day, the legend of El Dorado still exists because people around the globe still believe it needs to be found. Are you one of them?
DEPOSIT AND REDEEM YOUR WELCOME PACKAGE GET BONUS