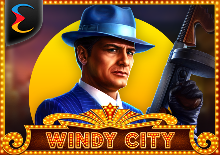 star star star star star 5/5 (301)
Step into this wild city and take a deep breath. Let the crisp wind fill your lungs as you make the most of your time in this ravishing city full of juicy secrets. Welcome to Chicago during the roaring 1930s! The Windy City, as it was called, is under American prohibition, full of rough gangsters, fierce competition, intimidating guns and banned whiskey.

As tough as these days can get, there is still a place for love. The fiancee of the Mafia boss Don, soon finds herself falling in love with Dons right-hand man. Will the taste of forbidden love be unbearable? Will Dons faithful friend and lady remain loyal to their word? Inside of Windy City, youll be wrapped inside the entire breathtaking atmosphere of a dangerous but yet playful Chicago flashing for you on the reels.

In this 5-reel, 3-row and 10-pay line slot, The Mafia Boss is a wild symbol, that substitutes for all the symbols except for the Scatter. The bosss car is a scatter symbol, that in a combination of three or more, will trigger 10 free games that can also be retriggered. During the free spins, the Scatter acts as a wild symbol and can substitute other symbols.

Are you ready to take a ride through the streets and secrets of Windy City? Will you betray your allies or stay silent as tensions rise? Test yourself and may the consequences unfold. Take your chances inside of this daring Windy City and make it out on top!
DEPOSIT AND REDEEM YOUR WELCOME PACKAGE GET BONUS